On the weekend of the 30th November & 1st December 2019, WGCNC hosted its second golf camp for junior girls in the region to develop their game of golf.

Ten girls attended the camp on Saturday at Taree golf course under the coaching eye of Belinda Hodson (Port Macquarie). The morning session, after a light warm up & introduction from all the girls, Belinda concentrated on the importance of alignment and practiced some long irons. After lunch the girls headed back to the putting area where they had tuition on putting technique, alignment, reading greens and games-based practice for distance control.

Belinda also allowed some time in the afternoon for bunker & chipping practice in preparation for the tournament the next day.

On Saturday night the girls and their parents were invited to the Manning Aquatic Centre where the girls cooled off followed by a BBQ dinner.

Sunday morning, we gathered at Taree Golf Club for breakfast which had been organised by the club as part of their tournament package and played in their 9 & 18 hole tournament.

In conjunction with the 18 hole tournament the CNC District Junior Girl Championship was held, The winners were as follows:

Again, the camp would not run successfully without the commitment of WGCNC and JNJG, for which both the girls and parents are very grateful.

I would also like to thank Taree Golf Club, especially Kay Woolcock & Todd Watkins for their assistance in organising this camp. 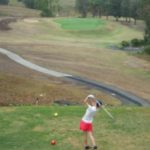